Visited a couple outdoor stores in Greensboro this week. 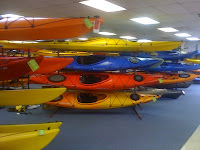 The first was Get: Outdoors.  Primarily a canoe and kayak retailer, it was a pretty cool place with some drool-causing boats, fishing tackle, clothing, footwear and a good supply of books and videos.  The staff was friendly and seemed knowledgeable.  This weekend they've having a demo boat sale and have a ton of inventory to get rid of.  If you're looking for a good deal on a kayak or canoe head over and check them out. 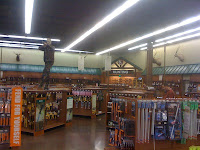 The second stop was at outdoor super store Gander Mountain.  I've been there several times but not since their recent remodel.  The store looked great.
The staff was very helpful and polite and they had a little bit of everything.  A couple negatives:  Since the renovation, the guns are now behind a counter so you have to ask for assistance before putting your hands all over a new Benelli or Winchester.   Second, I was interested in a climbing stand they were advertising in a flyer however they had none in stock and don't issue rain checks.   I wouldn't let these two things keep me from shopping at Gander Mountain though.  It's still better than Bed, Bath and Beyond.
Share |
Posted by Hunting & Fishing Carolina at 08:19 3 comments 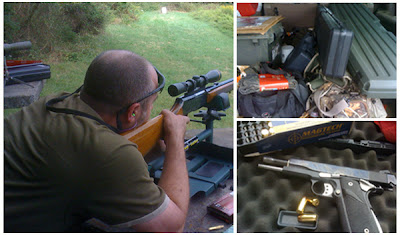 I spent some time at the range with my good friend, Mark, yesterday.  It's hard to beat the smell of gunpowder!
Share |
Posted by Hunting & Fishing Carolina at 09:59 0 comments 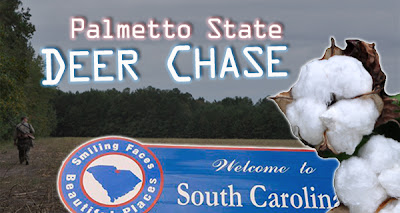 The sign said "Smiling Faces, Beautiful Places" as I crossed into the Palmetto State there was already a smile on my face.  Having taken the scenic route thus far on the trip to SC it wouldn't take much to persuade me regarding the beautiful places part.  I'd seen more southern fried scenery in the last hour than I had in years and it was wonderful.  There were fields full of corn and soybeans and sorghum and peanuts and cotton.  Lots and lots of cotton.  Seeing so much agriculture in action was therapeutic.

My buddy, Rusty, had sent a message saying, "Let's meet in South Carolina in a couple days.  Rifle season is open and the weather should be right."  My better half encouraged me to go but it didn't take much convincing.  I borrowed my uncle's Ford Ranger, stuffed a bunch of gear, snacks and camo clothes into a Rubbermaid container, grabbed the A-bolt and some ammo and took off.
We arrived near Bishopville around lunch time and headed over to his farm to check things out.  All the stands were in good shape.  Some of the shooting lanes needed work but the telescoping pruner, one of the best hunting tools ever, made short work of it.  The corn field we were going to be hunting had been cut a couple days prior and there was grain strewn all over the place.  To top it off, adjacent to the stand I was going to be hunting a persimmon tree was full of fruit.  It was going to be a good hunt
We headed back to the hotel, cleaned up and donned some camouflage.  It'd been 3 years since I had my Natural Gear on and it felt good....real good.

Rusty put the truck in park and we starting packing accouterments into pockets and backpacks.  Binoculars...check, facemask and gloves...check, thermacell...check, camera...check.  I needed bigger pockets.
After a quick prayer we headed toward our stands.  I scurried up the rungs of my ladder and quickly settled in for the afternoon. Surely I was going to see some critters during my sit!  My intuition proved correct and it didn't take long to do so.  A doe and two fawns appeared out of nowhere and began feeding on corn.  Fifteen minutes later another doe and fawn came in.  And so it continued.  Deer after deer after deer.  At one point there were seventeen of them, all does and fawns, feeding in the field at once.  Add three hen turkeys and a nice mature, gobbler to the mix and it easily became one of the best evenings I've ever experienced in the woods.  I was so busy watching animals and taking pictures that I didn't even consider shooting.  I might as well had left the A-bolt at the house.

Last weekend I got to do something that I've been wanting to do for a long time, attend a carry-conceal class.  As an added bonus I got to go with one of the finest people on earth, my Mama.
During a recent visit to the Gun Vault I noticed a flyer from Lewis Creek Shooting School describing an upcoming class.  So I called the instructor, Dick Jones, and boy am I glad I did.
The class was great.  Dick and his wife, Cherie, did a wonderful job of making the sometimes drab material fun and exciting.  The technical, or shooting, portion of the class was on their property, using their firearms and ammunition (we could have brought our own if desired).  Lunch, pheasant creole with rice, salad, bread and peach cobbler were all homemade, and nearly worth the cost of the class alone.
Mom and I both passed the written test and shooting competency portions of the class.  I was so proud of her considering she'd never fired a gun before.  As you can tell from the photo above we had a blast....literally!
To find out more information about Lewis Creek Shooting School or to register for future classes visit the Jones' website, Off the Porch Media.

While we were still living overseas my wife, knowing I was going through outdoors withdrawals, gave me a new bow, or at least some money to put one on layway. So after a bit of internet research I contacted Mark Brady at Adrenaline Outdoors in Sanford, NC.  I'm not sure how many bows Mark has sold to guys in the Middle East but he acted like it was no big deal, going way out of his way to accommodate my request.  I couldn't wait to get down to Sanford to pick it up.
Well last week the stars aligned and we headed down to pick it up.  When we walked in the shop Mark was putting the finishing touches on it. Here's what I ended up with:
Mission Venture
Fuse Axium stab
Extreme Challenger site
Mission 5-arrow quiver
Beeman Hunter 400 arrows
G5 Montecs
Nockturnals (bought 3 to try 'em out)
He finished everything, double checked it and said "You're all set."  So we walked up to the counter to pay the final installment.  My better half asked if I wanted her to write a check but I said maybe we should put it on my credit card so we could get the points.  Mark said, "You can just stop right there.  You can't pay anything else on this bow."  "What?" I said, completely confused.  "Rusty has taken care of it so you have a zero balance," he said.  Stunned, the only words I could think of was, "That jerk!"  One of my best friends, who just happened to be the one that talked me into buying my first bow, the one I was replacing, nearly 15 years ago had called down to the shop and paid the remaining balance on my bow.  I love doing stuff like that for folks but am not use to it happening to me.  He got me good.  On the way home I called Rusty and told him I was putting a new truck on layaway!  We both laughed like little boys.
This bow buying experience is something I will remember the rest of my life and treasure as long as I draw breath.  Not only because of the going-beyond-the-call-of-duty service I received from a complete stranger and the completely selfless blessing from a dear friend but because of the wonderful feeling it brought to walk up to the counter and be told my balance was zero.
It brings to mind another event, nearly 2000 years ago, when Someone out of selfless love for me (and you) paid a debt I was unable to pay.  All I had to do was accept the gift and my balance was brought to zero.  Nothing beats that.  Not even a brand new, killer bow. 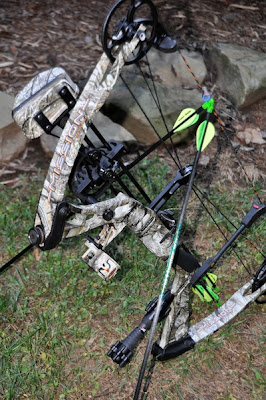 "For God so loved the world that he gave his only Son that whoever believes in him should not perish but have eternal life." John 3:16 ESV
Share |
Posted by Hunting & Fishing Carolina at 04:00 2 comments

Got a chance to do some target practice with my two eldest boys this week.  It's hard to beat pellet guns and spinning targets!

From the NCWRC website:
On Sept. 24, 2011, attend one of seven free*, family-oriented events hosted by the N.C. Wildlife Resources Commission and learn about fishing, hunting and wildlife conservation in North Carolina.
Through interactive activities and demonstrations, participants can connect with nature and test their outdoor skills. Some of the activities, which vary for each event, include:
The events are held in conjunction with National Hunting and Fishing Day, an annual celebration that promotes outdoors sports and recognizes hunters and anglers for their leadership in fish and wildlife conservation.