Hang around in outdoor circles very long and you’ll hear certain words and phrases. One word that is used to the point of being overdone is “trophy.” Enthusiasts such as ourselves spend a lot of time and energy pursuing trophy bucks, fishing on trophy streams, etc. When I first started my sporting escapades I too was after the heaviest creel, the largest buck, the tom with the longest beard and spurs and other outdoor trophies.
Ironically a trophy, like beauty, is in the eye of the beholder. On a recent, Alabama turkey hunt with my eldest son, Si, I realized that over the years my definition of “trophy” has changed.
Although we didn’t harvest a bird, or even hear one gobble for that matter, here are some true trophies I took on that hunt:

Recently a friend told me the story of two cousins. The eldest brother had a little boy and wanted to start taking him along on his outdoor adventures. The youngest pitched a fit, stating the boy would make too much noise, get tired too quickly, and would make a general nuisance of himself. Several years later, the youngest cousin wanted to take his son along to hunting camp. Long forgotten were the words he had spoken to his brother regarding kids in the outdoors. Apparently having a child of his own changed his perspective. Funny, having children has changed mine also!
God has trophies as well. He doesn’t have taxidermy hanging from the walls of His home but Heaven is full and will be full of things He treasures. Just thinking about the things He created: mountainous splendor, meandering rivers, creatures in all shapes and sizes, starry skies, majestic sunrises, etc, etc. etc. you know that God enjoys beautiful trophies. However, what He prizes most in this world is YOU! He passionately pursues people because having a relationship brings Him (and us) true joy. This pursuit has cost Him more than we can ever imagine. But the Lord was willing to give up the best that He had for us, His trophy.

For God so loved the world that He gave His one and only Son, that whoever believes in Him shall not perish but have eternal life. John 3:16 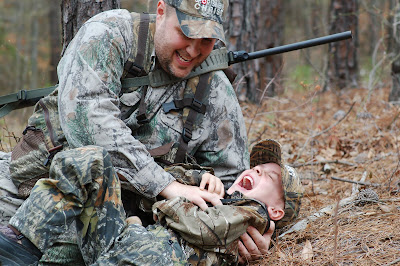