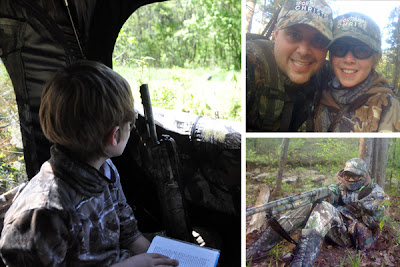 We just returned from the Cross Trails Outfitters Youth Turkey Hunt.  Although Si didn't get a turkey we got to see a lot of wildlife, catch a bunch of fish, eat around a campfire and most importantly spend some great father-son time together in God's creation.  What a great organization and what a great weekend!
Share |
Posted by Hunting & Fishing Carolina at 12:52 2 comments

Me and the boys took their buddy, Jacob, out for a little shooting this afternoon. Si had received a 1/5 share in a new Mossberg 500 Bantam for his birthday.  He and one of his co-owners, Zane, had been hankering to try her out and I wanted to make sure Si was ready for the upcoming Youth Turkey Hunt.
After a quick safety recap, they each gave it a whirl.  Not only did each of the boys shoot well, those poor cardboard boxes never knew what hit them, but they were very respectful and safe.  Looks like I'm going to be buying a lot of 20 gauge shells. 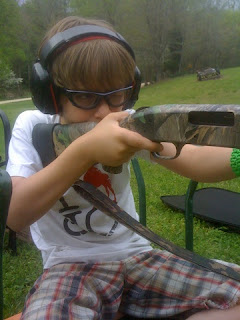 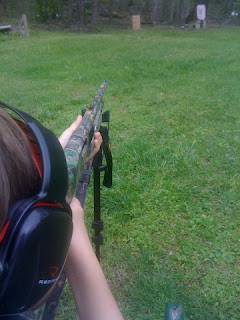 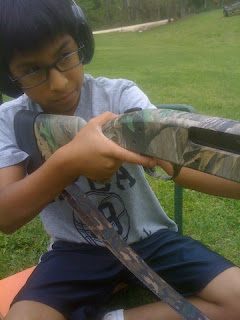 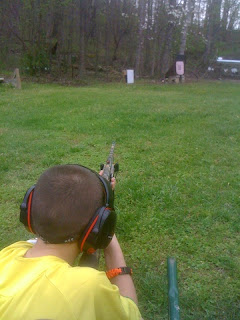 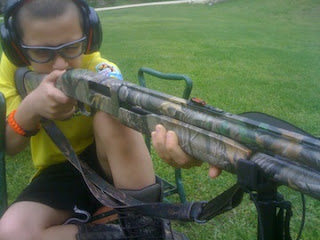 If you're planning on taking a youngster to the range here are a few recommendations:
1. Start with safety - Like Ruark's Old Man said, "I'm going to be pretty naggy at you for a while.  When you do it wrong, I'm going to call you..."  (The Old Man and the Boy, Robert Ruark).  Tell them what to do and not what to do, repeatedly.  Admonish mistakes and praise the right moves.   Hearing and eye protection are a must.  (You can get youth-sized stuff for pretty cheap.)
2. Start small - My two eldest received BB guns for Christmas.  We've spent a lot of time and a whole lot of bb's and pellets learning how to shoot.  I suppose a .22 could have been the next, logical choice but for what we have planned a 20 seemed appropriate.
3. Size matters - Make sure the gun fits.  The Mossberg is a youth-sized gun and came with shims for the stock.  It fits them like a glove.
4. Address Recoil - I installed a Limbsaver slip-on recoil pad prior to shooting.  Although I tested various turkey loads the boys only shot number eight dove loads.  On an upcoming hunt I will slip some #5 Federal Magshoks in and with all the gobbler induced adrenaline pumping through his system,  Si will never notice the difference.
5. One at a Time - While there were 3 boys there only one was on the range with me at a time.  The other two were playing off in the distance.
6. Have fun - Give them something fun to shoot.  We made home-made turkey silhouettes on cardboard boxes.   Soda cans are also a good idea. You can also make a competition out of it. Like who makes the most holes in the target, who makes the target jump the furtherest or whoever gets the shot closet to the center.
7.  Don't overdo it - When they've had enough, quit.
Share |
Posted by Hunting & Fishing Carolina at 23:07 3 comments