Having work assignments most of the day on Saturday, I hoped to squeek out a last-minute waterfowl hunt before the close of the season. Mark and his son Bailey had hunted this pond in the morning seeing plenty of mallards, some mergansers and a flock of geese. They were unable to get a shot but were confident that would change in the afternoon.

I rushed home from the office, picked up my oldest boy Si (it was his turn on the rotation), grabbed a bunch of gear and headed to our rendezvous point. Bailey had other plans so Mark and Mark M. were stationed on a point in a makeshift blind. From afar it looked like they were covered up in geese. As we walked closer it was apparent these were decoys. The set looked great. Surely we'd get a shot a some birds this afternoon.
Mark M was quick to show us a fine, bull mallard he'd taken just prior to our arrival. He could only stay a while longer, he muttered something about a "date night" but at least he'd scored. With his departure we settled into our spots, awaiting what would certainly be a great shoot.
As is common in waterfowling, deer hunting, bass fishing, or any other activity afield, ideal conditions do not necessarily equate with a full cooler. We hunted the rest of the day, having a great time cutting up and fellowshipping with each other, but never saw another bird.

With things so slow a decision was made to break one of the cardinal rules of duck hunting: never pick up the decoys early especially on the final day of the season. We gathered, stacked, and stored several dozen dekes and made our way to our trucks. As we rounded the final curve in the pond and were about to cross the pasture something caught the corner of my eye. Wouldn't you know it, a hooded merganser drake plopped down into the pond and began to preen, completely unaware of two men, a boy standing right out in the open. Unbelievable! Mark quickly loaded up and Si put his ear protection on. I shouted and waved my arms frantically and when the hoodie jumped he made an arc and rather than flying away from us, veered right over us. Mark made a beautiful second shot and the duck plummeted into the chilly waters. Ike rocketed off the bank, swam a beeline right for the drake and had it retrieved and in Mark's awaiting hand in short order. What a beautiful bird. And what a great way to end the hunt and the season. 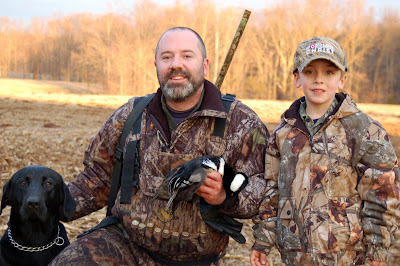