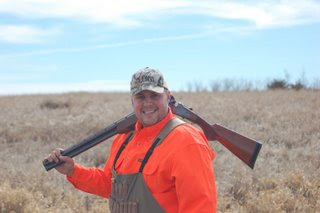 What's in a name? Well, when you're on an airplane headed to South Dakota and more specifically a place called "Pheasant City" you sure hope its alot. Following our two hour drive from the airport (actually it was supposed to be two hours but ended up being more like four with a first time visit to a Cabelas store, in Mitchell, and multiple stops to digitally capture some of the numerous wildlife sightings) Rusty and I pulled into the driveway of Pheasant City. Two rooster pheasants crossed the road in front of our rental and dodged into the snow filled ditch. Unbelievable. "Pheasant City" indeed!
The lodge was unlocked so we unpacked the car and did a little exploring. The lodge was spacious and properly equipped but the views and sounds coming from without continually called me outdoors. How in the world do the good folks of South Dakota get anything done 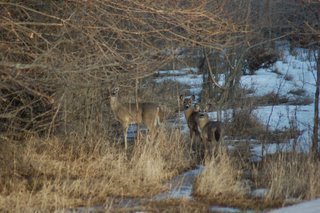 without spending each day staring at their beautiful surroundings?
After a fitful night's sleep, very similar to the fitful night before every first hunt, we ate a hearty breakfast and headed out back to shoot some clays. Each target met the same demise, a orange cloud of clay dust, boosting my confidence and steadying travel weary, sleep deprived nerves.
With briar proof clothing, ear plugs, hunter orange caps, shotguns and eye protection we loaded up into Pheasant City's mode of transportation, a camoclad, lifted, four wheel drive school bus (read "school beast"). Travis, our guide for the day, Rusty, Morris, a new friend from Tennessee, and two labs drove to our first spot of the morning. Morris and I would block at the edge of a wood lot while Rusty, Travis and the pups would put on a push. My ambush location provided a wonderful, panoramic view of the prairie. It was a gorgeous day! Distant clouds contained the sun's glare but temperatures rose into the 50's filling ditches, ponds and low lying fields with melted snow. A light breeze blew out of the west causing the switch grass to dance and filling my nostrils with pungent odors of a nearby stockyard. Flock after flock of mallards bobbed and weaved their way into a large grain field, unsure of the safety but sure of their desire to be there. Next, a "v" formation of Canadas flew across the horizon, singing their raucous chorus and settling into the same mallard infested field. Then came the snows, high flying travellers, flapping and fussing their way to some genetically imprinted location. My senses were in avian overload. A blur across my peripheral vision brought me out of my trance as a pair of rabbits darted through the woods. A rooster pheasant cackled as it took flight but it either vanished or had an obscure evacuation route because I never laid eyes on it. Moments later a dog came into view, and another and through the brush I spotted two blaze orange draped hunters zigging and zagging their way toward me. A 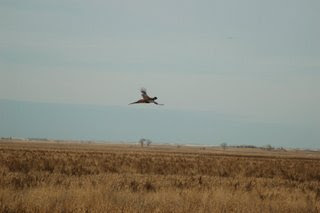 nother rooster cackled, this one coming in our direction, busting out of cover, through oak branches and out into the open, splitting the waiting blockers. "Rooster" rang out as I ducked, anticipating a close shot that never came. After the pheasant cleared Morris' twelve boomed but the bird glided to safety a hundred yards away.
The remainder of the morning was more of the same. Beautiful surroundings, good company and great shots (and some not so great ones). Unfortunately all good things must come to an end. Fortunately we were going to hunt again tomorrow.
Share |
Posted by Hunting & Fishing Carolina at 19:11 1 comments