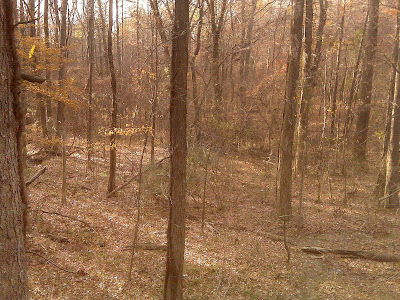 I got in the stand a little late this afternoon but still had high expectations. The woods were quiet as a funeral parlor. After a while the stillness affected my senses and I began to daydream of the big, no not big, monster bucks that would soon come ambling by my stand. Large bucks from my past came to mind. Big deer that had gotten away and had haunted me since:

On this fall day I really wrestled with whether or not to bother. The wind had blown 15-20 mph for a couple days and a full moon the previous night indicated the deer had fed all night and would be bedded down throughout the day. At around 2 in the afternoon I eased into a nice comfy ladder stand and rocked in

the breeze. This particular stand was located at the intersection of two old logging roads with ten year-old pines growing all around. I began glassing these roads, more out of boredom than anything else, hopeful that at least some turkeys might wander by. There were plenty of deer tracks crossing the sandy road to my right and I was surprised to see a fresh rub on a baseball bat size loblolly but the coast was clear. I scanned to my left and and soon as the road in front came into focus I spotted a deer with it's head to the ground, feeding along as it walked. When it lifted it's head I nearly dropped out of the stand. I hadn't been hunting very long but this was definitely the largest buck I'd ever seen. His rack was thick, very dark and heavy looking and it was getting thicker, darker and heavier looking by the second as he walked right toward me. I was in such a stupor it didn't occur to me that my Winchester model 70 was laying across my lap. The buck got to within 75 yards of my location and stopped, licked his nose and stuck his snout up into the air. Two things happened at this point. One, I remembered why I was sitting sixteen feet up in a tree and, two, I felt a gust of wind hit me in the back of the head. I tried raising the .270 slowly but my scent had apparently reached the buck's nasal passages and he bounded one time into the pines and was gone in the blink of any eye.

Two seasons later, near the end of the bow season, I had it in mind to sneak into a stand I'd erected over an oak flat adjacent to a food plot on lease over in Guilford County. Weeks before, to keep noise to a minimal, I had bushhogged the path leading to the stand. This allowed me to

sneak along to the stand without alerting all the deer in the county to my presence. A brief drizzle earlier in the day had quieted the woods even more and I was pumped about getting to my spot with stealthly. The path crossed a small creek and then veered around a hedgerow to the right. I always checked the creek bank for tracks this day was no different. There were several fresh tracks and one set of huge prints, very wide with dew clews clearly marked in the mud, indicating a heavy, mature deer had crossed there recently. After studying the tracks I jumped over the creek and walked around the bend. There, standing right in the middle of the trial, was a humongus buck. He was just as surprised to see me as I was him. And we stood there for what seemed like hours staring at each other. Finally he turned and ran into the woods and I just stood there.....dumbfounded.

The following season I was perched in a bowstand less than 80 yards from the same creek. My stand was chained to a huge white oak tree that set beside a well-worn deer trail and overlooked a two acre foodplot. Thirty minutes before sunset I heard the distinct sound of hooves crunching leaves as deer, possibly several deer, made their way toward me. It proved to be four deer, all does, and every one of them walked directly beneath me, filtered into the plot and began munching on brassica, winter wheat and Austrian peas. I considered dropping one of larger ones and calling it a day but that little voice in the back of my mind, the one that had seen too many hunting shows on tv and read too many articles in outdoor magazines,

told me to wait. Sure enough, fifteen minutes later I heard the sound of another deer walking my way. Through the branches below me I saw the glint of antler. After pausing briefly at the edge of the field he walked out and stood ten feet from me. I drew back my PSE, picked out a spot just behind his shoulder and let her rip. The shot was true. He kicked his back legs and ran off, circling back into the woods from which he came. I sat down and took a deep breath, my legs had turned to jelly. As I was attempting to regain my composure, pillowy gray clouds that had been gathering all afternoon began to sprinkle rain and I began to worry. Normally I would wait for a while, from 30 minutes up to an hour, to track an arrowed deer but with the drizzle coming down I was concerned about the blood trail would wash away. I climbed down, pulled out my flashlight and began tracking the buck. Big mistake. I followed the trail until it entered the woods, found a pool of blood ten yards into the timber and then nothing. I searched and searched. I spent two hours looking and found nothing. Finally I decided to come back the next day. Early the following morning I returned and searched some more I found the arrow and nothing more. Four agonizing hours later I realized the deer was gone.

I didn't see any deer on this night, other than the bucks of hunts past, but I left the stand hopeful that there will be big bucks in the future and maybe, just maybe everything will come together. At least I hope so.
Share |
Posted by Hunting & Fishing Carolina at 12:10 2 comments 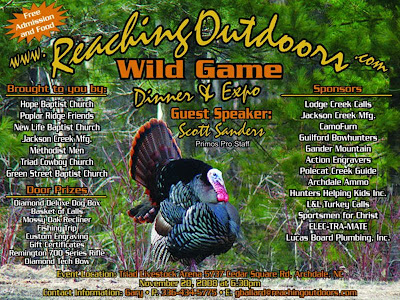 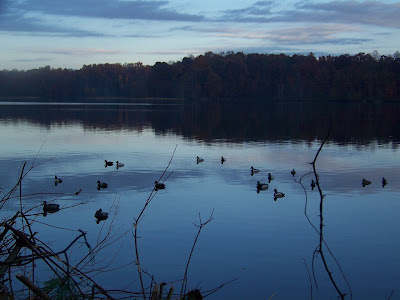 It's been a while since the alarm clock heralded 4am at our house. My watch's beep, beep, beep beckoned me through sleepy haze as I considered staying under the covers just ten more minutes. An elbow shot to the ribs courtesy of my beloved, startled me to consciousness and I was up and at 'em. I quickly donned shirts & a long sleeve t-shirt (forecast said it was going to be 60 degrees and I was going to put waders on anyway) and slipped into ninja mode, attempting to sneak out of the bedroom without further aggravating the aforementioned elbow throwing beloved. "Be careful. I love you." said she and I grinned to myself thinking about the progression we had made after nearly fifteen hunting seasons: First it was"Honey, don't go. Stay home." Followed by, "Have a great time." Then we had the "It's 4am, you're crazy" years. And finally we are at our current stage.
An hour later I was sitting in a blind with Mark and Ken awaiting the arrival of some ducks.

The decoys were strategically placed 20-30 yards in front of us. There were fake mallards, ring necks and even some canada geese wobbling in the waves of the lake.
A couple minutes before legal shooting time shotguns were loaded, ear plugs were put in and the blinds inhabitants went into stealth mode. Surely when the clock struck LST we would be bombarded by feathered fiends. Alas, the dreams of sportsman seldom become reality. So we continued our camouflaged vigil, occasionally spotting ducks or geese and although a couple groups checked out our spread, none would commit to landing amongst the decoys.
Around 9 I heard the distinctive but faint of hrrronk of a goose in flight. At first it sounded like a distant hound barking but the rhythmic honking grew louder and louder. Mark and Ken both said "geese" at the same time and subtle glance over the front of the blind revealed a flock of eight Canadas flying straight toward us. Closer and closer they came, dropping as they approached and looking more and more like they would soon kamikaze right into us. Grips tightened on shotgun forearms and even with ear plugs in I heard someone whisper, "They're coming."
I'm not sure what the signal was, usually Mark growls,

"Take 'em!" or Ken will just start blasting, but this time we all stood up simultaneously and began shooting into flock. After months of anticipation and preparation it came to this; eight prey and three predators. I made the rookie mistake of flock shooting, firing at multiple birds rather than picking out a target, and watched as Ken and Mark each dropped a bird and Ike was sent to make the retrieve. Usually such a poor performance brings about mental self abasement or at least blaming the Benelli however looking across the blind and seeing the smiling faces of my two friends immediately squelched any disappointment.
We stopped at a truck stop for breakfast on the way home. It had been a slow hunt but hot coffee, warm grits and sharing the morning with a couple of buddies made it a banner day.