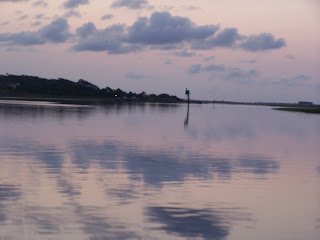 Few things match the beauty of a coastal Carolina sunrise! Romans 1:20 states, "From the creation of the world His (God's) invisible attributes,

that is, His eternal power and divine nature, have been clearly seen, being understood through what He has made..." As we, my buddies Mark, Joel and I, motored along the waterway in Mark's Southern Skimmer, we had a front row seat as the world around us shouted God's unseen qualities. A horizon of junipers, liveoaks cedars, sea oats and sand dunes gave way to the intense orange of the sun, a sliver, a wedge, a half, a red orb. With the sun rising the water's color changed from a deep dark blueish hue to shimmering green. If only you could bottle times like these...
For a while we trolled, paralleling the surf but quickly decided to head back into the sound. I handed Joel a spinning rod rigged with curly tailed jig (red body with white tail) as the skiff neared a likely spot. The attached Mitchell reel held a special place in my heart as it had belonged to my now deceased father. Mark and I readied our rods, he with a Mirrolure, me with another lead headed jig (white body, pink tail).
Before either of us could make a cast Joel's rod doubled over and line began to peel from his reel . Unbelievable! I put my rod back in a holder and tried to help out. It was a good fish and was giving Joel all he could handle. After several long minutes we could make out the shape of the fish and then the tell tale spots of a speckle trout. Joel worked the fish well, leading him right to the side of the skiff. Unfortunately Mark had left the net at the dock so I laid across the gunwale trying to get a hold of the trout, praying he was hooked well and hoping I didn't mess this up. Seconds later Joel's first saltwater fish, and largest fish of his life was in the boat. What we perceived as a good omen turned out to be a false indicator. Joel's trout was the only fish we boated but it was the smile on his face, the excitement of trying to land that huge trout and the great morning three friends spent together in the outdoors was definately a memory worth saving.
Share |
Posted by Hunting & Fishing Carolina at 20:10 1 comments

Normally I like Mondays. I know saying this can get you flogged among the cubicle set but I like the opportunity to start afresh the first day of the work week brings. Yesterday was different. By noon I was spinning my wheels and pulling my hair. Luckily my cell phone rang saving me from a certain office place meltdown. My buddy Greg had the day off and rather than calling to rub it in he was inviting me to ride down to High Rock Lake for some bassfishing. It took about 1/10th of a second to think about it and we made plans to meet up later in the afternoon. It was gonna take some time to wipe the cobwebs out of my fishing gear and change the surely decripid mono filament on a couple reels.

We met up at the local Walmart where I placed my gear in Greg's 20 ft. Ranger and placed myself in the front seat of his Silverado. Since I hadn't had a chance to hang out in a while we spent the ride down catching up. Definately one of the best parts of fishing is the fellowship!
As the Ranger's hull slipped into Flat Swamp I took a minute to look around. There were no other vehicles or trailers parked at the ramp. The sky was overcast with a slight breeze, temperatures were in the mid-80's and the barometer was on the rise. It was a BEAUTIFUL day for fishing. Wonder why there were no other vehicles or trailers parked in the lot?
We fished a couple of Greg's favorite spots, mostly points and brush lined banks. We were both throwing plastic worms. I was using a 8" grape with metallic flake Power Bait, while my boat mate was throwing a smaller "french fry" in blue. The first thirty minutes proved promising with several strikes and even a pick up but we were unable to put a fish in the boat. This pattern continued even after moving to many others spots.
The wind picked up so Greg decided that we should get off the main channel. He picked a likely cove and we resumed our fishing. I continued casting a worm while Greg switched to a crankbait. Immediately he hooked a small, healthy looking bass. After releasing it he cast again and caught another. I grabbed my tackle bag and grabbed his tackle box and helped myself to an identical lure. My first cast landed right beside a large stump. I turned the handle on my baitcaster twice when boom it happened. Nope not a largemouth. It thundered off in the distance. "Where did that come from?" The wind was blowing a bit and there were some clouds but nothing ominous so we continued fishing. Thunder became more frequent and the sky grew darker. Greg manuevered the boat around the point of the cove and back into the larger channel. Instantly we could see where the thunder was coming from. A humongous, dark cloud covered the horizon and was coming directly toward us. I looked over at Greg and said, "We better get outta here." Before the word "here" came out of my mouth he had the trolling motor back in it's bracket, had jumped off the casting deck and was hurrying back to his seat. The 225hp roared to live and he slammed the throttle to full power steering the Ranger right at the impending storm. A minute later Greg shouted, "We're about to get wet," and the first rain drop smacked the lens of my sunglasses. My captain let off the gas and quickly donned his Frog Togs, I pulled my packable anorack over my head but before I could get my arms into the sleeves the heavens opened up. Greg hit the throttle again but could not drop the hammer because visibility had shrunk to about 20 feet. After what seemed like an eternity (probably five minutes) we could make out the outline of a bridge in the distance and we headed in that direction. We finally reached the shelter of the bridge and Greg tied us off to one of the trestles. Water was everywhere. Rather than protecting my the elastic sleeves on my jacket was holding water in. We were both DRENCHED. 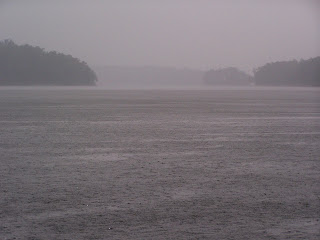 Eventually the rain let up and we decided to fish a couple docks before trailering the boat. Just before leaving I hooked a small bass and quickly chunked him back into the lake. Luckily the camera was stored away as it was probably the smalled fish I'd ever caught, identical in size to the crankbait I caught him on. At least I didn't get skunked!
Share |
Posted by Hunting & Fishing Carolina at 08:24 1 comments

Outdoor Devotion - "Before the Fall" 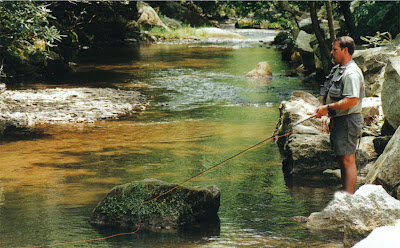 After a successful day of trout fishing at Stone Mountain State Park, including catching my first fish on a self-tied fly, my buddy Jack and I headed home on the gravel road leading to the blacktop. As we approached the park entrance Jack noticed a flock of turkeys feeding at the edge of the woods. A couple days prior to our trip to the mountain I had purchased a diaphragm call and had brought it along to practice and subsequently irritate my fishing buddy. With both windows rolled down, I put the call on top of my tongue and gave her a whirl. Each series of yelps was followed by a thunderous response from the tom. Man, was I feeling good about myself. This turkey calling was easier than I thought. After several minutes of my carrying on Jack had had enough and asked me to stop. “Watch this,” he said and slapped the truck’s horn with his palm. Immediately the gobbler responded to the sound of the horn. Jack’s smirk became raucous laughter as my HS Strut call was bested by his GMC pickup and my humiliation was complete. 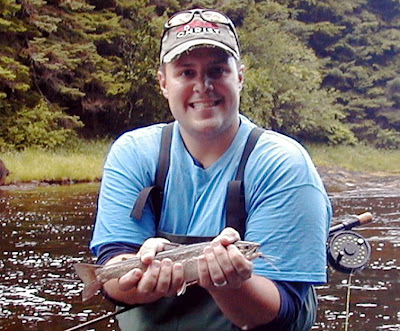 Another fly fishing adventure found me casting for Dolly Vardens along Alaska’s Baranof Island. My brother, Eddie and I had taken an excursion from the family cruise and were hoping to hook into some salmon. It turned out we were a couple weeks early for the run but were assured by our outfitter that the Dolly Vardens would provide ample challenge. As we waded into the water and I made my first couple casts I looked over at the other members of our party and couldn’t help but chuckle. Floating lines were flying in all direction and the creek was being whipped into bubbly froth. With plenty of fly fishing experience I was awash with smug satisfaction that surely I looked like a pro to these rookies. That is until my wader boot caught on a large river rock submerged in the chilly waters in front of me and I instantly went from angling premadonna to soaked, bumbling yahoo.
Pride, it’s one of our most common spiritual maladies. It seems most prevalent when we try to compare ourselves to others for the sole purpose of boosting self esteem. In the process we end up thinking more highly of ourselves than we ought to and usually it ends up costing dearly. When pride is involved it’s quite easy to go from hero to zero for as the God’s Word says, “Pride comes before the fall.”
Jesus was our perfect example of how to live a humble, pride-free life. Although He was the only Son of God, He considered it nothing to leave His home in glory and come to live among mankind, eventually dying on the cross, at the very hands of those He came to save. Take Christ’s example at the Last Supper. Jesus, God incarnate, got up from the meal, got down on His hands and feet and washed His disciples’ nasty feet. Sort of puts things into perspective doesn’t it?

“Pride comes before destruction and an arrogant spirit before a fall.” Proverbs 16:18
Share |
Posted by Hunting & Fishing Carolina at 13:59 0 comments