Nothing screams summer in Carolina like chasing bass and bream in a small farm pond. My friend Mark called Sunday after Church and suggested we do a little fishing. After the boys finished their afternoon nap we loaded up a spinning rod, two Zebco 202s and a tub of nightcrawlers and drove over to Mark's.
It was a pretty little pond tucked back in the woods. There was pretty little pier spanning from one bank half way to the other side. And as we approached the waters edge a bunch of pretty little bluegills left their circular beds and headed for deeper water. I baited up the boys and within seconds both their bobbers were, well, bobbing. Almost immediately we were into fish; small green bass, and beautiful bluegill as large as your hand. The smiles on two little boys' faces were much larger!
The rest of the evening was spent seeing how far and how frequently they could cast. There was an occasion snag (in the trees, on the pier, they even snagged one another) but everyone had a great time and miraculously no one was hooked. As we drove home both boys were already asking, "When can we go fishing again daddy?" I can't wait to go again myself. 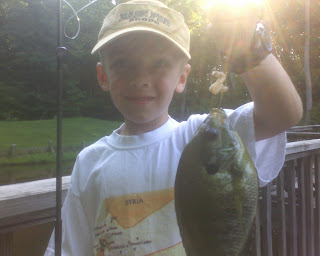 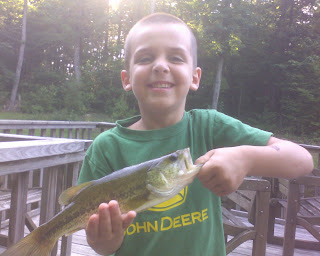 Notes: When you take your young children fishing keep in mind a couple things: 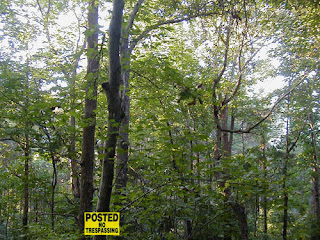 Preseason scouting and hard work had paid off with a couple of prime stand locations. The one I had picked out for the first morning was hanging sixteen feet up a white oak, surrounded by at least a dozen year-old rubs on thigh-thick cedars and situated in the middle of three well-worn game trails. My stands were up by mid-July and the area was allowed to settle down for the September opener.
Work duties kept me from my bow stand the morning of Opening Day so afternoon found me walking to my honey hole anticipating a successful hunt. As I approached the spot where I planned on spending the evening I got the feeling something was not right. I couldn’t put my finger on it but the negative feeling intensified when I spotted a set of ATV tracks. When I got to the large oak where I had hung the lock-on, my stand was lying on the ground at the base of the tree.
Thirty yards away sat a four wheeler and twelve feet above it, in a small pine, sat a camouflage clad hunter holding his crossbow. Months of preparation flashed before my eyes as anger chased disbelief from my spinning mind. After a brief, albeit tense, conversation, it turned out the other hunter was a new member of our club who had misread a map and chosen the wrong spot to hunt. Luckily nothing irreparable was said or done in the heat of the moment. Forgiveness proceeded apology and the situation was resolved. 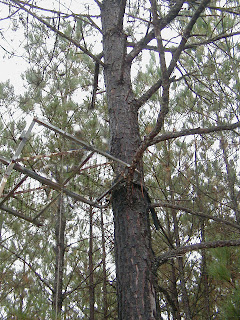 Several counties away and roughly twelve months later, a beautiful, autumn day had seduced me away from office duties and lured me to my favorite stand overlooking an established food plot. After donning head-to-toe camouflage and filling my fanny pack full of unneeded necessities, I begin the short trek to guaranteed bowhunting success. I had taken 30 steps or so when I caught movement out of the corner of my eye. Rather than a trophy deer or some other type of critter there was a man sneaking through the hay field with a fishing pole. I can still picture the willow leaf spinner bait twirling in the September sunlight. You see, this particular parcel of property has a couple ponds chocked full of bream, crappies and bass and this fellow had it in his mind to crawl under the barbed wire fence, sneak past several No Trespassing signs and try his hand at landing a largemouth. When he spotted me staring at him through binoculars he quickly modified his plans and decided to reverse his direction. I must confess as I chased him off the property, with less than congenial intentions, my mind raced through possible locations to dispose of his body. He escaped, unscathed and I was forced to ask God’s forgiveness for the ungodly thoughts that had run rampant through my mind.
We have all been in situation where we felt wronged. How many times are we supposed to forgive someone who cuts down a deer stand, someone who trespasses, someone who steals a scouting camera, someone who poaches private property at night? Jesus said we are to forgive seventy times seven. In other words, when we call ourselves Christians we are called to go above and beyond when mistreated. Before reacting to others’ actions it is important to recall the numerous times we been in the wrong.

“…if you do not forgive men their sins, your Father will not forgive your sins.” Matt. 6:15
Share |
Posted by Hunting & Fishing Carolina at 10:18 1 comments