Yesterday I fished with Tom Roller of Water Dog Guide Service. His clients had been very successful over the last week so Tom's sage advice was to take his 23' Parker out for bonito, spanish, amberjacks and some big blues. While tempted I had tailing reds on the brain and being a bit of a hard head I opted for the afternoon bite in skinny water.
I'd tried for at least a year to hook with up with Tom on either a fishing trip or waterfowl hunt but the logistics never worked out. However, when a last-minute family vacation to Emerald Isle opened up I called the good captain and luckily we were able to set it up.
Around 1:30pm I pulled up to the West Beaufort Water Access and met my guide. Tom was launching his Jones Brothers Bateau and although the ramps were in pitiful condition he made quick work of it. After brief introductions we were off. 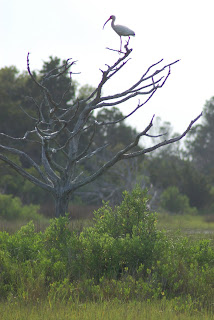 The skies were robin's egg blue with an occasional cloud here and there. Air temps were in the mid seventies but it was a bit breezy. Not exactly ideal for topwater but a beautiful day nonetheless and as the old saying goes, "A bad day fishing is better than...." Tom killed the Yamaha and we coasted into a likely looking flat. He dropped the Minn Kota trolling motor into the wa ter and directed the boat parallel to the shore using a remote control strapped to his wrist while I began casting a white spinner bait style lure. Had several small strikes, probably pin fish, but no takers. We spent a while blind casting, pitching lures in fishing spots without any success working our way through the flats and soaking in our picturesque surroundings.
There comes a point in every outing where expectations meet and ofttimes collide with reality. Before any trip I find myself daydreaming, visualizing what I hope will happen. Prior to this particular adventure I had pictured myself making a perfect 50 foot cast, plopping a clauser right in front of the snout of a ravenous redfish, watching him devour the fly, setting the hook, fighting him mightily on a 7 weight flyrod and netting him with a flourish. The conditions however were dictating a different scenario and although I was not regretting my decision to chase reds. Captian Roller wasn't making it any easier as he talked about the success he had experienced earlier in the day, fishing in the ocean as he had recommended to me. No sooner had that thought crept into my conscious than it was quickly squelched by observing my surroundings and remembering that I was doing what I loved. Snapping back to reality I cast a Berkley Gulp five inches from the grassline and was instantly slammed by something that peeled line off the Shimano spinning reel and put a strenuous arc on the St.Croix rod. 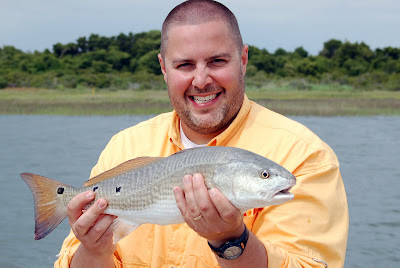 Fighting like a mack truck there was no question mister redfish was making an appearance on the other end of the line. Every time I got him within reach of the boat he would make another dive, taking line and causing the reel to scream. All too soon however the battle was over and the 23" drum was in Tom's net. A couple quick pictures and the fish was returned to the sound.
Captain Tom decided the tide was proper for some wading so we relocated to even more shallow wader. He dropped the PowerPole into the brine and we ventured out of the boat and into the cool water. That was my kind of fishing. As I've said here before, there's just something about being down amongst 'em. I was elated...that is until I stepped into a two foot deep mud hole and lost my Keen sandal. It took some doing to get the shoe free and after laughing at my misfortune I promised myself I'd be more cautious. I was also introduced to a worrisome urchin Tom referred to as periwinkle clams. Beautiful and diminutive in size the periwinkles were just small enough to slide into my sandals but too large to come back out on their own accord. So I found myself walking with an awkward, side to side gait until my most unwelcome passengers could be released.
We trudged and occasionally limped through ankle deep water looking for tails, wakes or other evidence of feeding reds but never saw what we were looking for. Either the tides, the windy conditions or maybe recent rains had moved the drum elsewhere. So we jumped back into the bateau, changed tactics and relocated to another spot.
Our final spot was a tidal creek mouth. With the rising tide our quarry was stage in this type of ambush locations, ready to devour any unsuspecting prey that came along. My gulp paddle tail jig happened to come along and BAM! the fight was on. Another redfish, this one 20" was brought to the net. I quickly put another cast into the same location, hopeful there were other reds there. The jig hit the water and BAM! another great strike. This fish was not a drum however but turned out to be a nice 18" chopper, aka bluefish. A couple more cast came up empty and before we knew it our time was up. Riding back to the ramp I was grateful for another day of life, a beautiful time on the water, the fish that we caught and a chance to hang out with a neat guy, Captain Tom Roller. However, I'm now ready to get in the ocean and check out those bonitos and amberjacks!

This past weekend was the 2008 Sportsmen for Christ Flyfishing Retreat in Brevard, North Carolina. Below are some pictures from the trip.

Shed antler hunting has become a very popular pastime in the outdoor community. I guess it's an opportunity for hunters, beleagured with winter-induced cabin fever, to get back into the woods. Maybe its those childhood memories of treasure hunts or games of hide and seek. I like to get out in early spring and look for sheds. Not only is it good exercise and an excuse to get out but it's a great opportunity to do some scouting next season. Deer trails are more easily noticed, rubs and scrapes are still visible and if you find a dropped antler or two you know you're onto something.
Each year whitetail bucks shed their antlers and begin the process of growing new ones. In North Carolina this usually takes place in late February through March dependant upon winter weather conditions.
A couple months ago I was out scouting for a turkey hunt. When walking along the edge of a large food plot, looking for turkey tracks, strut marks, droppings and other sign that would indicate a good place to set up a blind I spotted something glimmering in the midday sun. Closer inspection showed it to be a large, right sided, five-point antler. Ten yards away was another smaller, right side antler. There was absolutely no turkey sign whatsoever in that field but I will definately be checking out that location again prior to next deer season.
When we begin our walk with Christ He says that we are a "new creation.' Not only is it important that we shed habits, tendencies, relationships and other things it is imperative that we embrace a new worldview. Other people, situations, decisions, etc must be seen through the eyes of Christ influencing how we speak, act and even how we think. As a friend recent told me, we must live lives that reflect the very nature of Jesus. May God give you strength to shed.
Therefore, if anyone is in Christ, he is a new creation; the old has gone, the new has come! 2 Corinthians 5:17
Share |
Posted by Hunting & Fishing Carolina at 21:39 0 comments