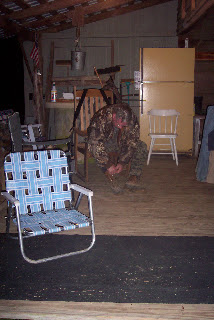 Morning comes even earlier the second day in hunt camp. We weren’t quite as responsive to the alarm’s clarion call. Stumbling from room to room gathering socks and gloves and calls and other assorted paraphernalia scattered about the cabin. I stepped out of the cabin onto the porch and instantly noticed the cool dampness. Everything was dripping wet. Clouds covered the moon and stars and a whipping wind masked all other sounds. At least it was no longer raining.
After Emory finally got his boots on we walked to our spot for the morning. I put out a couple decoys in a wheat field that backed up to a swampy bottom full of oaks, poplars and hickories and we concealed ourselves in some young pines and brush along the field’s edge. Eventually the sky turned from black to gray to lighter gray. Once again our setting was ideal and yet again it proved pointless. We waited approximately an hour before packing it up and heading back for some breakfast. Maybe the weather (or at least the wind) would let up and our afternoon hunt would be better.

PM - It was pouring. The gentle, spring shower had become a deluge. Thunder reverberated across the horizon and the wind was bending ancient oaks like they were saplings. I crawled into a shooting house, overlooking the clover field to escape the conditions and pulled out my small, camouflage Bible to pass the time. The swaying of the wind and the sound of raindrops hitting my tin roofed refuge combined with the sleep deprivation always associated with hunting trip put me right to sleep. I was awoken by the thump of the New Testament I’d been reading earlier hitting the bottom of the stand. I looked out the windows, the rain had stopped, and the sun was shining. 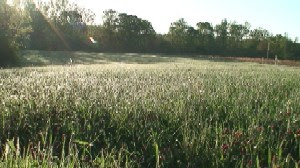 The wind however, continued its blow so I decided to remain in my current locale. A glance at my watch showed I’d been “resting my eyes” for almost thirty minutes. I pulled a slate and striker out of my vest and began a series of purrs and clucks. Twenty minutes later I did it again. Nothing. Motion in the corner of my eye caught my attention. It was a decoy turning in the wind. Maybe I should pick up, cross the dirt road to another location and try it there? As I planned my new plan of attack I began to doze again. Again, motion in the corner of my eye. This time it wasn’t a decoy. A hen walked out on the field, feeding along the edge oblivious to my presence. She fed along the tree line and turned back to toward the woods. As she turned I noticed an appendage hanging from her neck. She was a HE and as he came closer it became more and more apparent that he was a mature gobbler. My call was lying at the bottom of the shooting house and picking it up would have meant putting my Benelli down and possible noise. So I decided to wait him out. Then he noticed the decoys in the field. His attention was captured and he meandered toward them and closer to me. When he reached the thirty yard mark I let him have it…3 ½ inches of Winchester #5’s right across the beak. He never made another move. I took a deep breath, gathered my stuff up and went down to check out my prize. He was an old bird. Eleven inch beard, long, rounded off spurs and beautiful coloration. I thanked God for this blessing and went to pick up the decoys. Emory walked up a minute or so later with a big grin on his face, which became even bigger when he saw the bird on the ground. We headed back to camp, two happy campers. 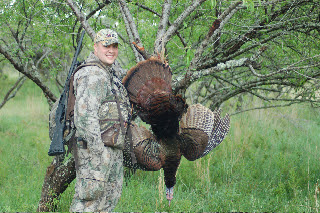 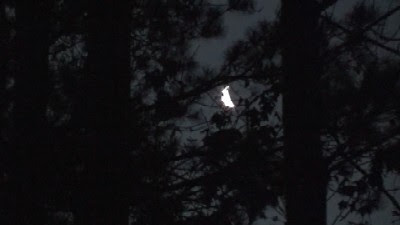 No matter what state you’re in morning comes awful early at hunting camp. Waking with just enough time to throw on some clothes and put on still damp boots we walked out of the cabin into the predawn darkness. Unsure which direction to head, due to our lack of scouting success, we headed toward to a location close to Emory’s ridge, as good a place to start as any.
After placing a hen and jake decoy in the field we eased back into the piney shadows and donned head nets and gloves. The setting was ideal. Soft calling from my Lynch’s Foolproof box call echoed through adjoining oaks and pines but evoked no responses. The woods were coming alive with all types of animal and avian activity but no turkeys made themselves known. Finally we heard a gobble way off, probably a half a mile, in the distance. He gobbled four times and went silent. We sat in our location for twenty more minutes and moved to another spot, calling a little and waiting a little, then moving to yet another location. The results were the same. It seemed all turkeys within the vicinity had lockjaw. We decided to pack it in and go have some breakfast.
Following some bacon and eggs we got back to it. We drove to a new location and split up, Emory choose some hardwoods next to a large pond and I headed down to a large, lush clover field. There was some good sign around the field edges with scratchings and droppings and a large dusting bowl. As soon as I got myself set up it began to sprinkle and I thought, “Great, this will get those birds out of the thick stuff and into the fields.” Things were looking up. I made a couple calls with my slate and as if on cue the clouds broke loose and a downpour began, soaking my calls and my spirits. I sat for a little while and decided I’d had enough, packed up my gear and headed back toward the truck. Emory walked up right after I did and we drove back to camp to wait out the storm. Our wait lasted through the day as the rain continued into the night. Maybe we would do better in the morning.
Share |
Posted by Hunting & Fishing Carolina at 21:30 0 comments 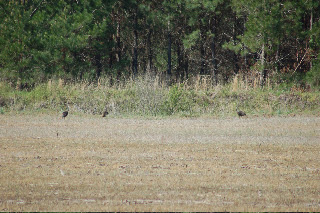 Three turkeys, all hens, were feeding in a large wheat field. Long, gangly legs supporting black and bronze bodies shimmering in the afternoon sun. I glanced at my watch, 4:00pm (3:00pm ‘bama time) as the truck whizzed down Highway 17, my friend, Emory, at the wheel. A moment later, on the other side of the road, another turkey was feeding, this one appeared to be a jake but at 65mph who can be sure. Two minutes later, in a field way off the highway, a mature tom was blown up, in full strut, displaying his grandeur for all the world to see. My trigger finger was twitching, my mouth was salivating and that little voice in my head, the one it always pays to ignore, was telling me to unbuckle my seat belt and roll out of Emory’s Ranger. How much longer?? 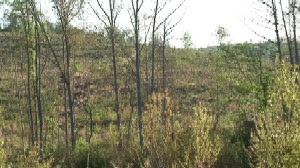 By 5pm we were fully camoed and set up in the wild. Emory was on a hardwood ridge adjacent to a food plot, I was in a swamp bottom paralleling another plot. Our intent was to scout a bit, maybe call a little and listen for roosting birds so that we’d know where to set up in the morning. A recent cold front had brought spring to a screeching halt and clamped shut the mouths of gobbling toms. And other than some sparring squirrels and the repeated bites of no-seeums (mental note: put Thermocell in turkey vest.) it was a beautiful but eventless evening. Emory hadn’t made out much better. Some deer and a rabbit “large enough to put a saddle on” were all he’d seen.
Share |
Posted by Hunting & Fishing Carolina at 20:54 0 comments